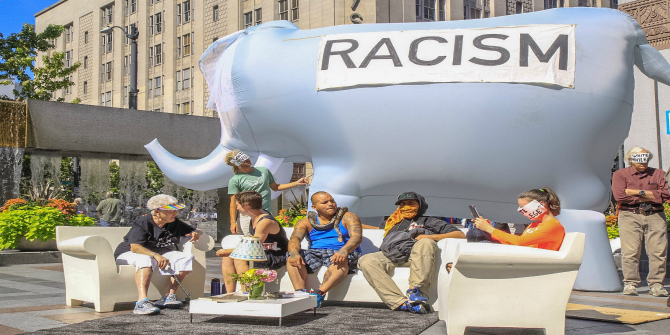 The Elephant in the Room

This blog has its origins in a social media post of mine last week where I hit out against the perpetuating of privilege by the Aotearoa-NZ society.  I have since refashioned this into a blog, also including the writings of another KIN whanaunga Abigail McClutchie.

The past two weeks in Aotearoa-NZ’s history for most people have been very challenging. For none more so than the family and friends of those murdered in Christchurch on the 15th March 2019. A cowardly act carried out by a White Supremacy terrorist and potentially a band of like-minded supporters. These kinds of acts usually require energy, fuel to fan the fire of destruction. The hateful act seems to have triggered a turning point in our country, that is, a style of reporting that honoured the dead and their families rather than the perpetrator. It is ever so unfortunate that the transformation came at the expense of innocent children, women and men from the Muslim community here, a place they considered home. At a time when they were following their religious and cultural practices in a place of peace, their own community mosques. It was a call from the people that challenged the media and how it should be reported. Sensationalist reporting and selling the (bad) news became secondary to the people at the centre of this tragedy. For our Muslim communities across Aotearoa and across the globe we are deeply sorry for your losses, they are our losses too. Lost potential, lost contribution, lost time with family and friends.

One of the outcomes of the attack is discussion about the elephant in the room, racism. In our case Aotearoa is the room and the elephant racism has not seen such blatant expression since the days of European arrival. Instead this country has managed its racism in much more subtle ways; micro-aggressions, negative stereotyping and ‘innocent’ assumptions. For the fact that our communities have been able to discuss openly and share in the grief together is a fantastic move forward for our country.  But only if we keep talking and recognise the power structures, privilege and discrimination that is Aotearoa-NZ #ThisIsUs.

My social media presence is usually limited to liking others photos, with the occasional tagging of friend in a funny meme, and keeping abreast of interesting events in the area.  But encouraged by the openness that NZ was showing towards moving forward, I decided to throw my thoughts out to facebook:

NZ is coming to terms with how to recognise racism and privilege – and we must realise that it is the simple unnoticed things that have the most impact. Let’s start by asking why the 2 most shared pics on my newsfeed have been about our Pākehā PM and a Pākehā cop wearing hijabs… this is how we perpetuate privilege. 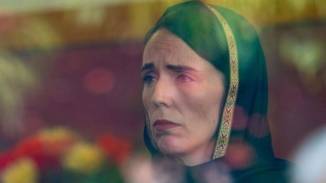 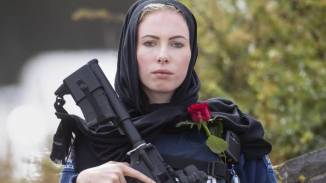 This is in reference of the aftermath of the horrendous attacks our Prime Minister, and a police officer on the front line in Christchurch have both donned hijabs in support of the Muslim community.  The general tone of comments saying this captures NZ’s example of tolerance, compassion and humanity.  Yet if you read any of the numerous opinion pieces circulating now, this is not the case (see Susan Devoy; Moana Jackson; Anne Salmond; Shilo Kino to name a few).

Where are the Muslim faces? How come it is only white women getting the privilege of being in the spotlight. Mainstream media likes to put white people in the spotlight, and marginalise the minorities. It is seen as a sign of respect and a sign of beauty that white woman are wearing the hijab, and yet Muslim women are disrespected for the same thing. Beauty as portrayed by the mainstream media.

Imagine if the picture of the cop was a Muslim (or a woman of colour) in a hijab holding a gun. I guarantee the headline, and the comments would portray a different picture.

I am not taking anything away from the power of this pics. It is a sign of progress, and I commend both these women. But if we don’t recognise the hegemonic structures that perpetuate the mainstream narrative (that beauty and power is for the white) then how are we meant to move forward? Society is influenced much more strongly by these unnoticed forms of power than overt signs of discrimination.

I was impressed with the responses of my fb community.  There were quite a few in support of my statement.  One in particular (a middle-aged white male) actually asked how he could address his privilege.  Another said this had made her think of the implications of such a movement.  My cousin’s comment opened up the narrative to another angle that I had not yet considered:

I don’t question the good intent of non-Muslims wearing hijabs, and I hope that those who read your post do so with an open heart and mind. The running narrative in the media is of how empathetic and kindhearted non-Muslims are to Muslims by wearing the hijab. Unfortunately, media lost the opportunity to instead highlight the importance of the hijab to Muslim women, their faith and identity – why this is something they can’t just put to the side – and how not just Friday’s attack – but our schools, workplaces and society ‘norms’ have contributed to Muslim women not feeling safe to wear hijabs in the first place.

Others jumped in to defend the story and the portrayal of the movement—the wearing of headscarves by those not of Muslim faith as a means to support and show solidarity to the Muslim community: “Two strong influential people being used as images of what woman can do, encourage other women to unite”.  As much as I agree, there is still more that needed to be said:

These are images that can be used in powerful thought-provoking ways. However, it is only the power and words of the privileged talking to the privileged that influences the thoughts of the privileged. There are so many articles out there right now finally getting airtime that say the underprivileged have been shouting these things about NZ from the roof tops for years. But no one listens (remember the backlash against Taika when he said NZ was racist). And yet when these strong powerful white woman come out and show unity, suddenly all of NZ is listening. But why weren’t they listening before? And will they listen later when all this dies down?

My post was not about coming down on these women, but trying to provoke thought around the power structures of the society that we live in. To ask, why is it that these women were chosen as the faces of solidarity (Jacinda is obvious), why couldn’t we celebrate Muslim women in their own beauty?? Has anyone asked the Muslim community how they feel about everyone walking around with hijabs? I am quite sure you would find mixed reviews (as with any general question posed to a general pool of people)?

Indeed there have be mixed opinions, in support and against.  If this movement creates more awareness, and makes our Muslim community feel much safer, then I am in whole-heartedly in support of that.  But let’s also be aware of the white saviour complex.

The final comment in this post came late, with an admission that he had not read through all the comments.  But it is this comment below, from a (white male) friend who disagreed with the shade that I was throwing, that points to everything I was trying to allude to, and to the transformation that needs to take place in our society.  Until we can see how privilege is perpetuated, we cannot change it:

I know I am a bit late to the party on this and I reject hatred against most everything but I truly confused by the racism angle here. Islam is a religion not a race. Christians come in all colours as do Muslims. Not sure how privilege is relevant here either. What I do see hear is people who have tried to do something positive after a FANATIC did something horrific. Whilst maybe it may take catastrophic events to come together, surely it is not something that is to be judged as being ‘not the right way to do it’!

Although this was in response to an earlier comment, I feel this is better as a conclusion, and a response to the above.

Privilege comes in many forms. It is about recognising that some people don’t have the same access to resources, and that some people who do work really hard for what they have began with a head start. There are privileged Maori, there are underprivileged white people. But there are also power structures that are aimed at oppressing parts of our society that make it easier for some to move around. And until we start to see how small everyday things that seem so innocuous are actually affecting society, then nothing can be resolved.

#Thisisus New Zealand.  Let’s recognise it, so we can fix it.